BARRETT KNIVES
Hand Forged in The Wilds of Alaska 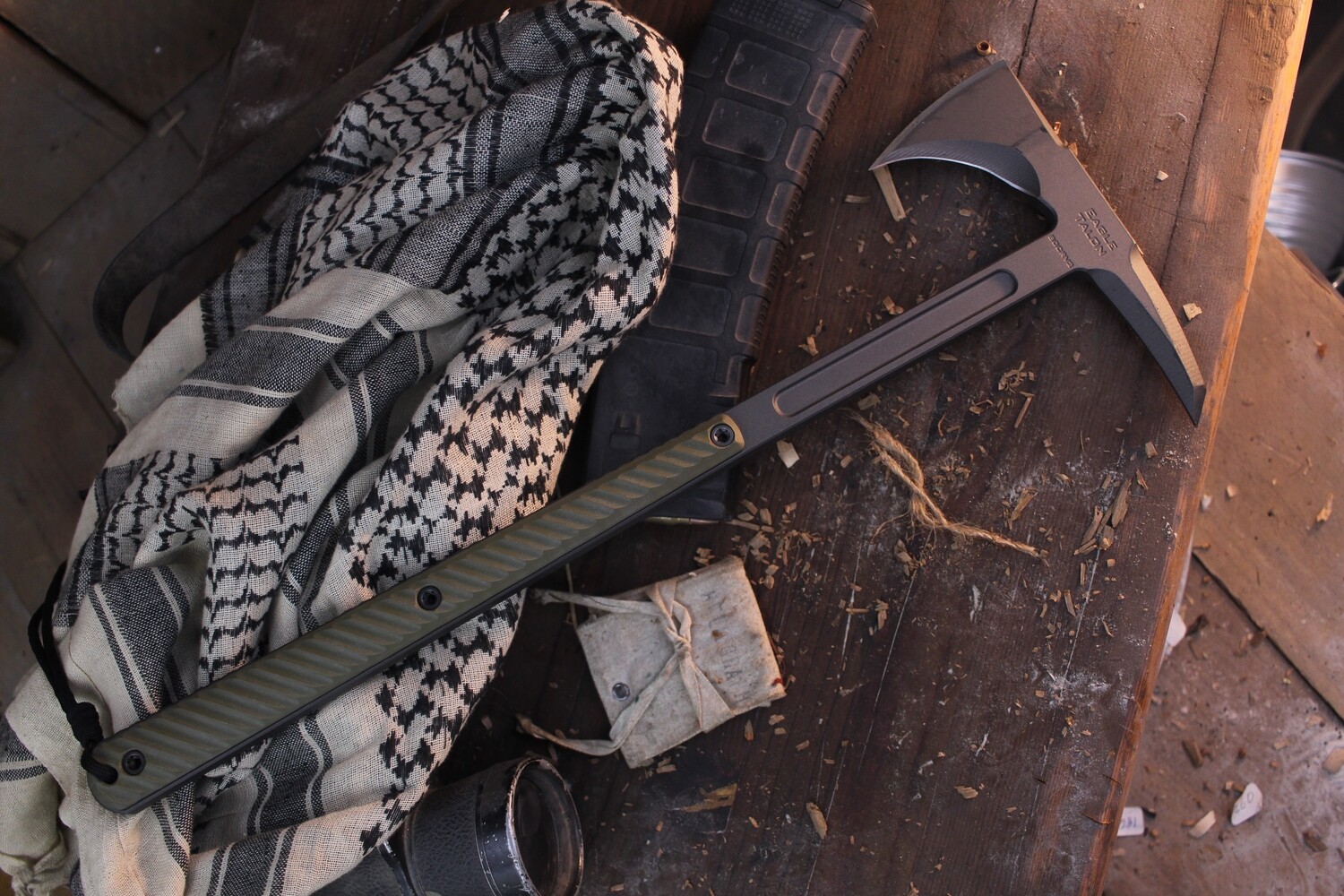 It takes more than an aggressive look or a gray and black finish to make a tomahawk a tactical tomahawk. Remember, tomahawks were "tactical" for hundreds of years in their original forms. That is, they met the needs of the soldiers and frontiersmen as both a tool and weapon in the battlefield conditions they encountered. In the view of RMJ Tactical, a contemporary tactical tomahawk should be able to withstand all modern battlefield conditions — areas ranging from the Salt Lake City, Utah, Olympics, the jungles of South America, to the rugged mountains of Afghanistan. RMJ Tactical tomahawks have been carried in all three.

A tactical tomahawk should be easy to use and carry. A well-designed tomahawk feels like a natural extension of the arm. The use of it should be intuitive. It is interesting to note that people throughout history have been naturally inclined to "hack" with a bladed object. As for the tomahawk scabbard, it should securely hold the tomahawk in place while making it easy to draw the tomahawk out. Also, the modern scabbard should have multiple carrying options. Finally, the modern tactical tomahawk should be able to perform as an efficient tool and weapon for the many tasks soldiers and officers encounter. RMJ Tactical makes tomahawks that meet these requirements. It is not by chance; it comes from many hundreds of hours of design time, customer input, customer requests, and testing, testing, testing.

To embark on designing a tomahawk that will be used in modern combat means embracing a new set of serious design issues that were previously not considered. The end user today is not necessarily interested in the historical aspects of the piece. The end user is not as interested in aesthetics. The most important part of the design is that the hawk can perform its tasks without any failure and with deadly efficiency. Worst case scenarios are played out with use, abuse, environment, and duration.

When Jimmy Lyle designed the knife used in the movie First Blood, he commented that when designing the knife, he imagined himself stranded in the wilderness with just a knife. Then, he tried to think of all the things he would need in a knife to get out alive. The design process takes a similar route, drawing on not only RMJ's experience, but more importantly the experience of those who have been involved in Special Op missions, and those who have found themselves on the battlefield in ugly situations. Eagle Talon was the first all-steel integral designed tomahawk, originally designed by Ryan Johnson in 2001, updated and redesigned in 2009 and again in 2011.

Save this product for later
Display prices in: USD
bottom of page