THE AMUK BY 3 DOG KNIFE 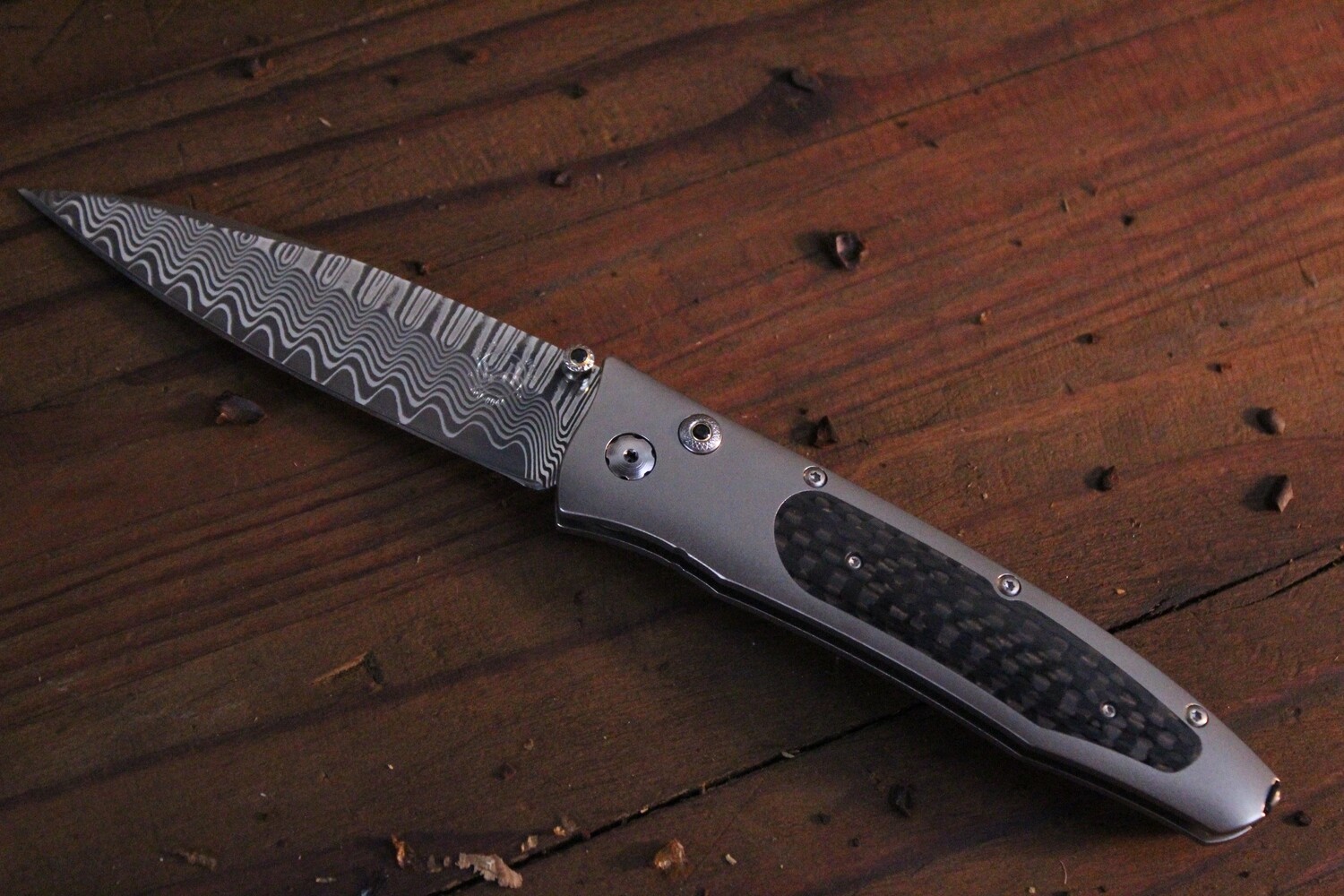 The Gentac ‘Centrifuge’ features a light and resilient frame in aerospace grade titanium, inlaid with carbon fiber. The blade is 'Wave' damascus with an extra strong core of ZDP-189. The one-hand button lock and the thumb stud are set with spinel gem stones. An exceptional design that offers rigorous performance in a sleek, comfortable knife, the Gentac is also the perfect canvas to showcase William Henry’s range of exotic materials and techniques. The ‘Centrifuge’ features the craftsmanship, hi-tech, and forged metals that are the hallmark of William Henry's collections; a distinctive personality statement to be worn and used for a lifetime.

Titanium is a low density, strong, lustrous, corrosion-resistant (including sea water, aqua regia and chlorine) metal with a silver color.
It was discovered in Great Britain by William Gregor in 1791, and named by Martin Heinrich Klaproth for the Titans of Greek mythology

William Henry uses only aerospace-grade titanium alloy for our frames, clips, and micro-fasteners. Called 6Al/4V, it is titanium with a little aluminum and vanadium added in for additional toughness and tensile strength.

William Henry's patent-pending Wave Damascus features a core in ZDP-189 (HRC 67) or VG-10 (cryo-tempered to a hardness of HRC 61) for superior sharpness and edge retention over time. The core of the blade is clad with alternating layers of stainless steel and nickel silver. The billet, 45 layers in all, is patterned with a custom die to create the undulating waves that emerge across the bevels of the blade. This material can be dark-etched for contrast, or etched and re-polished for a more subtle pattern.

Carbon fiber is a material consisting of microscopic fibers composed mostly of carbon atoms. The carbon atoms are bonded together in crystals that are more or less aligned parallel to the long axis of the fiber. The crystal alignment gives the fiber high strength-to-volume ratio. Several thousand carbon fibers are bundled together to form a tow, which may be used by itself or woven into a fabric.
Carbon fiber's properties, such as high stiffness, high tensile strength, low weight, high chemical resistance, high temperature tolerance, make them very popular in aerospace, civil engineering, military, competition sports. William Henry uses the highest grade, and beautifully textured carbon fiber for its collections of jewelry, knives, money clips and cufflinks.

Natural spinel is a gemstone that has become a great favorite with gem dealers and gem collectors; one might even say thatspinelis for gemstone connoisseurs only.
It is a hard glassy mineral occurring as octahedral crystals of variable color and consisting chiefly of magnesium and aluminum oxides.Some spinels are among the most famous gemstones in the world: among them are theBlack Prince's Rubyand the "Timur ruby" in the BritishCrown Jewels, and the "Côte de Bretagne", formerly from the French Crown jewels.

Save this product for later